Dogs demonstrate the lowest permeability, independent of the site in the intestine compared to rabbit and monkey. The interspecies differences were caused by differences in intestinal absorptive surface area and/or cell density between species (Jezyk et al., 1992). In this way it may be possible to correlate the permeability in these tissue segments to human tissue (Jezyk et al., 1992). There was a good correlation between the bioavailability of PEG compounds and several hydrophilic drugs (acyclovir, atenolol, cimetidine, nadolol and hydrochlorothiazide) in human and rat, with the rat tending to slightly under-predict bioavailability in human. In contrast, there was no apparent correlation between dog and human, with dog grossly over predicting bioavailability in human. Furthermore, transport systems may have different efficiencies or specificities in the dog, since several compounds that are poorly absorbed in humans (such as acyclovir, methyldopa, and nadolol) were almost completely absorbed in the dog (Dressman and Yamada, 1991). This suggests that the rat is a better animal model than dog for predicting human bioavailability of paracellular and carrier mediated absorbed compounds (He et al., 1998).

Metabolism in the gut lumen and wall can make a variable contribution to the overall bioavailability and hence to the pharmacological activity of a wide range of drugs. Gut wall metabolism is generally highest in the jejunum and decreases distally.

Small intestine of the pig

The efficiency of digestion and absorption is highly dependent on the rate at which digesta move through the gastrointestinal tract. The rate of passage can be estimated by the use of digesta markers, substances which are not normally secreted, digested or absorbed by the gut. Data on intestinal transit times in experimental animals appeared to be scarce. Especially this information can be of importance for predicting intestinal absorption. The pig demonstrated a transit of both fluid and particle markers 5-15 times more rapid than that of other species. 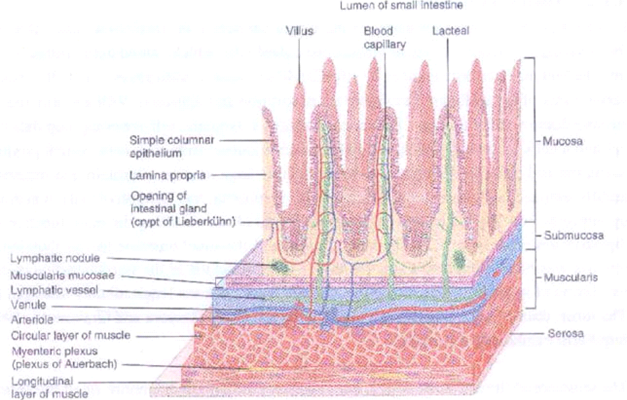 The apical membrane of the absorptive cells features microvilli. Each microvillus is a 1 µm long cylindrical membrane-covered projection. The microvilli form the so-called brush border. Larger amounts of digested nutrients can diffuse into the absorptive cells of the intestinal wall because the microvilli greatly increase the surface area of the plasma membrane. Moreover, the membrane of the microvilli is rich in protein, cholesterol and glycolipids and contains digestive enzymes such as dissaccharidases and peptidases. Also specific receptor proteins are located here, which bind substances before absorption, like vitamin B12 and conjugated bile salts. There are an estimated 200 million microvilli per square millimetre of small intestine The mucosa contains many cavities lined with glandular epithelium. Cells lining the cavities form the intestinal glands (crypts of Lieberkühn) and these cells secrete intestinal juice. The submucosa of the duodenum contains duodenal (Brunner’s) glands. They secrete alkaline mucus that helps to neutralise gastric acid in the chyme. Total volume secreted by crypts: 1800 ml/day (most extracellular fluid), pH 7.5-8.0. The fluid is absorbed rapidly by the villi and serves as watery vehicle for absorption.

There have been relatively few studies done on pre- and postnatal maturation of intestinal motility (Heimann, 1980). In infants, intestinal motor activity occurs less frequently than in adults, with a different pattern of rhythmic peristaltic activity (Radde, 1985). In general, intestinal peristalsis is irregular and partially dependent on food intake and feeding habits (Heimann, 1980).
Another important difference between neonates and older individuals is the type and degree of bacterial colonisation of the gut. At birth the intestine is virtually sterile and a rapid colonisation occurs with a flora that is different in breast-fed and formula-fed infants (Raddle, 1985). A further change in bacterial flora occurs at the time of weaning (4-6 months) which is important for the hydrolysis of compounds that are conjugated and secreted in the bile so that unconjugated compound can be absorbed by the intestinal epithelium (e.g. conjugated bile acids). On the other hand, the neonatal gut is capable of converting glucuronides, excreted into the gastrointestinal tract from the bile, to their unconjugated and hence enterohepatic reabsorbable form by the presence of β-glucuronidase. This enzyme is absent in the adult gut.